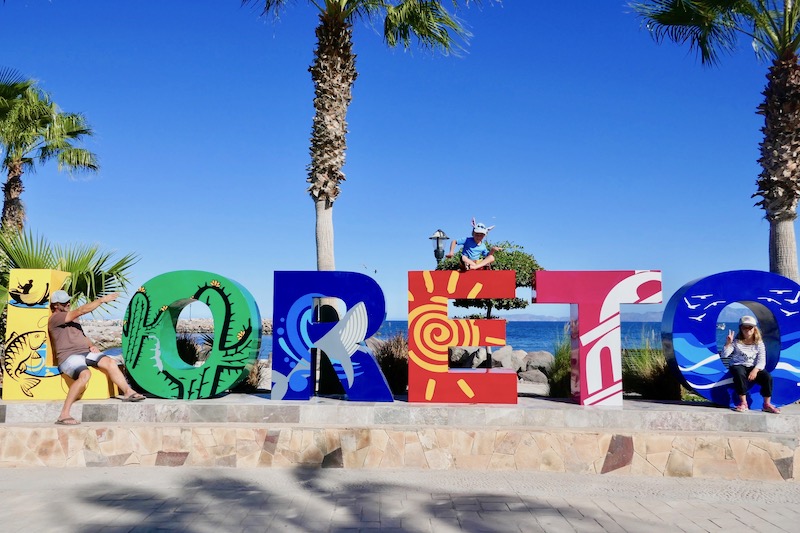 Loreto is a quaint coastal town, and home to another Mission.  Pulling in around mid day, we parked up on an empty shaded lot and went for a walk through the old part of town.  Stopping in at the Mission, we learn it was built in 1697, has over time endured earthquakes and the pounding of hurricanes that have many times put it on the verge of collapsing only to be rebuilt & reinforced.  Loreto was considered as the origin of all Missions many expeditions that made possible the establishment of other missions and later the development of towns and cities departed from here, making it of the most beloved of all Missions.  Built in 1697 simple and modest, all the supporting out buildings are now gone, leaving just the church itself.

By visiting all these missions, the kids are not only getting their history lessons, but it has also sparked an interest in them asking “who was man is nailed to the cross “and why?  So the drive from Mulege to Loreto was spent explaining who Jesus was, the story of his life,  why and how he died and the people around him.   Tim & I were both raised catholic, not practicing but were able to recall the story fairly well, we think.

Early one morning we joined in on a bird watching tour, binoculars in hand we saw several different types of birds we’d never seen before.   From memory we saw an American Kestral, smallest of all falcons, a couple of brilliant red Vermillion Fly Catchers, humming birds that flashed an intense irredisent purple & green.  pintail duck, egret, cactus wren, white wing dove and a few more I’m sure.

Jayla attends a small, 14 student, Montosori School in Loreto, so Charley & Jaxon joined her for a couple of days.   It was a great opportunity for the kids to tune their ears back into Spanish, as Jaxon was saying he couldn’t understand a word.   The teachers were very welcoming & invited us to spend more time if we wanted to.  But again, we are feeling the need to keep moving.  Perhaps we can put them into school in La Ventana for a couple of weeks.

We’ve decided to make our way over to San Juanico aka Scorpion Bay.   Saying our farewells, we load up and hit the road. It’s a 2hr drive South to Cuidad Insurgents then 2hrs on a quiet road North to San Juanico. Maps.me tracks us perfectly and we arrive at 4pm, enough time to pick a nice camping spot on the bluff above the beach with the waves rolling in just 25 feet below. Another stunning sunset bathes the sky in the prettiest rich colours.

Scorpion Bay is an isolated fishing village on the Pacific side. It’s massive bay edged with fine sand. A popular surf destination, with several nice US/Canadian owned homes. The main road through the centre of town is paved, the rest are all dirt. No gas station, grocery store or drinking water, everything has to be brought in, just one small convenience store.

Our camp site is perfect, there wasn’t any waves on the first day, so we rode the bikes out and around the point, bumpy road had Charley complaining on the way out and Jaxon on the way back. We stopped and watched a solo kiter surf the waves while the kids explored the lava formed rock pools with crabs sea snails. The ride back Jaxon complained. Am seriously starting to wonder if they conspire to take turns at whining. After lunch we take another ride along the beach and chase the seagulls, check out a whale shaped, whale watching boat that ran into trouble on it’s maiden voyage, washed up on shore, 10 yrs later it’s still there. More garbage littering the beach are all the fishing nets imbedded in the sand, sad to see. That evening our neighbours from Whistler pull in. Robbie & Maria are on their way home after spending 2 months exploring the Baja in their camper. The next day we take the paddle boards out and try to SUP surf. We have a few boards with us, i’m used to my nice wide, stable 11 ft inflatable. The new board is fibreglass, 10’2″, narrower and very different. I can feel all my muscles firing just to hold my balance, am gonna be sore tomorrow. The waves here are very clean and consistent, the wind is blowing us down the bay faster than we realize. Tim is with the kids and is teaching them to boogie board. Paddling back I can he’s pushing them with the waves, they are getting the best rides and are grinning from ear to ear. The water is shallow and we have to watch for stingrays, we’re told the sting is more than nasty so doing the foot shuffle is a must. I manage to catch a few small waves, it’s a rush and want to go again, but have to share, Tim’s turn. Kids are in wetsuits and feeling cold, so i take them up for a hot outdoor bucket bath. A neighbour beside has given us a bag of prawns. Kids in bed we sit outside, gin & tonic in hand, hot buttered prawns, good conversations with the waves lapping below. The night is clear, bright moon in a starry sky. This is perfect, i soak it all in as tomorrow we drive to La Paz.

This morning’s drive from Scorpion Bay back to Cuidad Insirgentes was absolutely stunning.  It’s winter the desert is green and full of life.  Along the road, herds of healthy wild horses graze.  Scrawny cows, bony goats & black face sheep also roam free.  Dozens of y’all purpose built poles for the Osprey to build their nests and prevent them from interfering with the power lines.   We have seen more of the Turkey Vulture than any other bird, not a particularly attractive bird to look at, but he’s credited for cleaning up the road, desert & beaches of dead animals & fish.  His bald red head lets him scavenge without getting dirty head feathers, and impressive wing span & light body means he can soar  effortlessly for long periods.

We’ve identified without name the many different kinds of cactus.  My favourite looks like something out of a Dr Seuss book. Tall, thin and bends down as if to shake your hand.