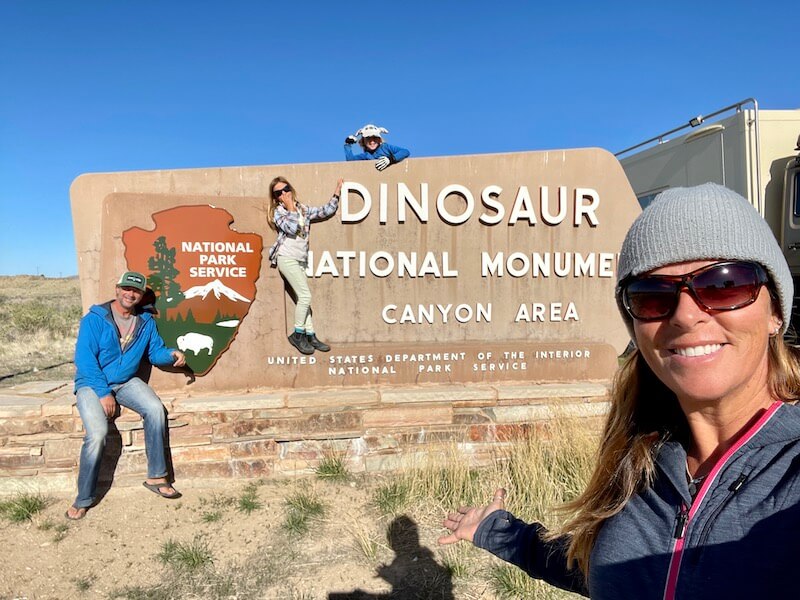 Like most kids, Charley & Jaxon have a fascination with dinosaurs. They know many of their names and must have at least a dozen small plastic Dino toys with them in the truck. Which is why we didn’t tell them about this place until just 10 days ago. We wanted to build their excitement, but knew they’d be asking every day “are we there yet?”

Pulling up to the gate I had my reservations about any wow factor, as the signs were pointing to a ‘Quarry’. There weren’t any full size Dinosaurs along the drive, disappointed we had to reminded them that this was not a ‘theme’ but a ‘National’ park. Presenting our Park Pass at the gate allowed us access for no additional cost, so in we went. This is our 5th or 6th time using the pass, it’s been a great investment!

Because of the pandemic & the fact that it’s indoors, we’re given an entry ticket stamped for date & time.  Which turns out to be perfect as crowd control, we’re there early and can take our time.  Inside we find our wow factor. Not sure of the length of the wall, but my guess is that it’s approx 150ft long by 40ft tall.

Back in 1909, while searching the region for fossils, Paleontologist Earl Douglas, discovered a rock formation layered with prehistoric plant and dinosaur fossils.  Chipping away, Douglas & his team eventually reveal more than 1,500 dinosaur bones.  Like a window into the late Jurassic, scientists believe that when an ancient river, close by, dried up leaving dinosaurs dying from thirst along its muddy banks. The carcass eventually sank into the mud, when the waters returned, the bones were pushed downstream where they piled into into a log jam type jumble.  Over the next 150 million years, the mud turned to rock, slowly moving upward to where it is today with tectonic forces.

This quarry wall of bones consists of hundreds of different animal and plant species.  Distinct with some skeletons intact, we spent the next hour identifying the different bones of the Stegosaurus, Allosaurus, Diplodocus, and Apatosaurus. Downstairs there’s an 80ft painted mural depicting what the region looked like back then. They even got to touch a 150 million year old petrified bone, which they said just felt like cold stone.

Outside, we took a walk to look for more fossils encased in the rock along with seashells and ammonites.  The kids complete their Junior Ranger worksheets and hand them in proudly for marking and their badge.

It’s hard to believe this very area to be covered in thick jungle type vegetation. To the West all we can see is rough grey rock mountains, to east we see the flat green grasslands along the banks of perhaps that same ancient river. We pretend we can see them grazing in pairs, calling to one another while Pteranodon circle the sky. All under the same sun & moon we see today, just 150 million years ago.

From Dinosaur NP we leave Utah and cross into Wyoming and make our way up to Jackson Hole and the Grand Tetons National Park.