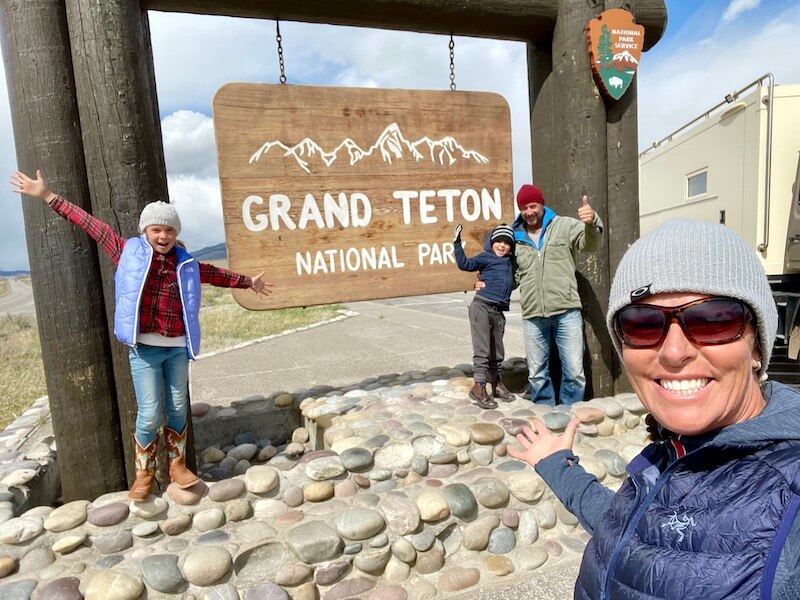 This morning we crossed into Wyoming. Excited for the change in scenery, but not the cold. As we make our way towards the valley of Jackson Hole, a tidbit if roadside information tells us we are following along the migration route of the Pronghorn, and that this is the second largest migration route in North America, (Cariboo is the largest). Grazing in small numbers in the fields beside us they look to be an elegant mix of Antelope and Goat. In the distant blue sky we can see the snow capped peaks of the Teton mountain range.

Twenty minutes South of Jackson, we made a stop to catch up with an old friend I’d met in Chamonix back in the early 90’s. We’ve stayed in touch over the years through Facebook. Gavin was an accomplished off-road driver with a promising career, winning several titles in the Baja 1,000 before being diagnosed with MS. Life is very different for him now. It was nice to catch up & chat.

The town of Jackson lies on the valley flats, at the Southern end of town chairlifts rise up to the ski slopes on Snow King Mountain. To the North great plains stretch to the edge of Grand Teton National Park. A resort town much like Whistler, similar in size and population of roughly 10,000 that can accommodate eight times that in the peak ski season. The restaurants, galleries, beautiful gift shops and mountain equipment stores were busy with spending shoulder season tourists. Jackson is a four season, multi sport destination resort, sitting at 1,900m with some of the most magnificent mountain views in the state.

Ground snow has melted, there is a little heat in the sun, but the crisp early Spring air still calls for a jacket. We spent the day walking around town, admiring the elk rack archways & window shopping. Unlike Whistler, there are many stores selling real fur and animal skin coats. Am not sure which is worse, the farming and slaughter of animals, where by all of the animal is used for something, or the production of synthetic materials for with the use of petro-chemicals and that environmental impact? am not about to go down that road, my guess is that they both have their pro’s and con’s. Unwilling to spend $100+ on lunch, we made our own delicious designer sandwiches in the camper. Leaving town in the late afternoon, we headed to a BLM camp at the top of a dirt road on an exposed hillside. Just meters from the snow line, so half the camping area isn’t yet open. We’re not alone, there are a quite a few other campers here. The biting cold wind was soon followed by sleet then snow. Grateful to be snuggled up inside with the heater on, we feel for our neighbours shivering in their tents.

The second night we found a beautiful spot, close to a rivers edge. The kids busied themselves fishing and skimming stones before spotting a large beaver as he swam up stream. As the sun dipped the temperature went with it. Snuggled into sleeping bags with hot water bottles, the kids enjoyed a movie. We climbed into our bed to read and write.

OMG it’s freezing cold this morning!! The inside temp must be close zero. Tim is the first up and put the heater on, which takes time to warm up so the frigid air blowing out is awful, so we turn it off. My feet are freezing, am wishing I had Ugg Boots! Warm, fluffy animal (sheep) skin boots. But I don’t so on go the sneakers, wool socks, and every warm layer we own. Rousing the kids from their warm beds seems cruel, we’re keen to get into the park before all the traffic. The kids were a greater battle, too snug in their bags to move, but early has the best chance of wildlife sightings, so we coax them up with a steaming mug of hot chocolate. Through the gate by 8am, and now it’s snowing! The cab of the truck takes a good 25 mins to warm up, our frosty breaths mean we have to have the window open a crack. I have dug out mum’s Irish mohair blankets, worth bringing after all! First wildlife sighting is of a Red Fox, the size of a small dog with a big fluffy tail, minutes later we see a Grizzly sow with her 4 cubs making a dash along the roadside.

As the day rolls on, we see more Grizzly bears and too many Bison to count. Heavy roadside parking is indicates wildlife near by, we pull over and join the ranks of on onlookers. A large, male Grizzly at the back of a meadow. People with tripods and long lenses are snapping photos, others like us are looking through our binoculars. He’s grazing & slowly heads in our direction, within a couple of minutes he’s at close range. Along with most people we head back to the truck for safety, being up high we can see over everyones heads. Suddenly he appears 50ft from us, to my horror people move closer for a better photo. One lady in particular, mid 60’s with full length camera lens & tripod moves to the front. Stupid or brave? we think stupid! The Grizzly could have been upon her in a moment had he decided. No doubt he was accustomed to the paparazzi, but still a wild animal.

Circling towards Jackson Lake we stop at the visitors centre so the kids can hand in their completed Junior Ranger work books, take the pledge and receive their badge. We take a walkout to shaded end of Jenny Lake, the ground is muddy and the air thick with freshly hatched mosquitoes so we aren’t out long. The kids put their hands in to the frigid lake and confirm that it is FREEZING! Walking back to the truck we see our second Red Fox. By the time we leave the park we have seen one Black Bear, 2 Beaver, 2 Red Fox, 21 Bison, Pronghorn Antelope, Elk, Ducks, Canada Geese, Snow Geese, 2 x Great Grey Herons, 2 x Red Tail Hawk, an Osprey, and the ever present Squirrel.

The road connecting to Yellowstone is still closed due to snow, South facing, it’ll be closed for another few weeks. So we head back through town, then West up one steep mountain pass of the WY22. Descending into another picturesque valley and into Montana.