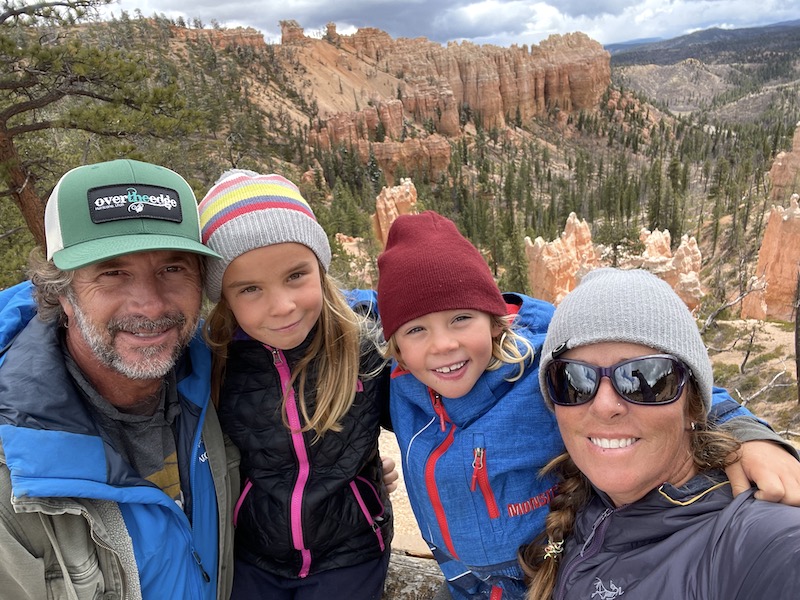 Our friends Pat & Brenda Montani told us about Hurricane, pronounced ‘Hurkin’, Pat loved the mountain biking here, said it was more scenic than Moab, and recommended we check it out.  Sadly, as I write, Pat is in the Squamish Hospice.  How quickly life changes…                                                                                      Just two months ago we had a fantastic weekend together whale watching, beach walking & fishing.  Pat had been suffering the previous 6 weeks with a nasty bout of ‘gastritis’, or so the Mexican specialist had told him.  Adjusting his diet & eating habits, he was well & on the mend.  Returning to Canada, upon arrival Pat suffered a heart attack and was rushed to hospital in Vancouver, where he languished weakly, awaiting intervention.  Because of Covid, Brenda was forced straight to Whistler for her 2 week quarantine period, home alone & worried sick.   Post surgery he was sent home to recover….but his health continued to decline.   Further testing revealed that Pat was in stage 4 with Pancreatic Cancer, and that every day was a gift.  This photo was taken on our last fishing trip in Baja.

We received word today that Pat had passed peacefully, surrounded by family.   We’re utterly heart broken, the world has lost a great man, taken too soon.  Pat was very philanthropic.  In 2010, Pat & Brenda started Bicycles for Humanity, a not for profit foundation that over the past 10yrs has brought dozens of containers full of bikes, both old and new, to the underprivileged people of Uganda.  Not only bikes, he also set up an education centre in Uganda, offering free education.  Breaking through the slow, heel dragging pace of bureaucracy & red tape, working tirelessly to make a difference.  A serial entrepreneur, he once proudly told us that his greatest business was the one he never made any money off.   He leaves behind his best friend and partner of 50 yrs, two daughters and 2 grandchildren.

Today we ride in memory of Pat who loved life and loved to ride.  Gooseberry Mesa, a large plateau with dozens great trails.  Rolling out of camp we set off to explore.  It’s a beautiful blue sky morning and perfect riding temperature.  There are miles of beautiful single track intertwining over varying terrain from slick rock to sand, I was in heaven.   The kids also had a great time, their skills improving massively.  Following our lines, they too were surprised at what they were able to ride.   Being sure to pack along plenty of yummy snacks to keep their energy up, taking our time to enjoy it all.

On the way back to camp we bumped into a friend from La Ventana!  We knew this was her favourite place to ride, but never expected to actually bump into her.    The kids were super excited to see Mel, who insisted we come join her camp.  It’s a nice life she has, 5 months kite foiling in Baja, then 5 months biking all of USA’s epic trails.  Living in her RV, free as a bird, just the way she likes it.

Just a stone throw from Hurricane and our next stop, Zion National Park.  This morning we awoke to dark grey clouds, am sure it’s gonna rain.

We haven’t done much research on the Parks, so it’s all a bit of a surprise. The National Parks have impressive infrastructure, visitors centres, tourist & equipment shops selling everything from camping gear to Christmas decorations.  They also have showers, for a small fortune, $16 we each had 4.5 mins of hot water bliss.

Because of the rain we decided over lunch to move on, promising to return.  Our brief visit to Zion was the drive through the park.  Winding up the mountain to the tunnel entrance, we were treated to some stunning views of soaring rock faces, before they too disappeared behind the rain.  The 1.5 mile tunnel was carved out in the 1930’s.   Only 13 feet high, the traffic is radio controlled to allow overweight vehicles to pass, which was us as we are 12’3”.  We drove down the centre, grateful we were able to fit,   emerging on the other side to a completely different landscape, Zion a hidden gem of great beauty.

We continued the climb towards Bryce Canyon beneath the dark clouds.   At this altitude, 7,000ft, they’re sure to mean snow!  We camped well off the road down by Losee Canyon, just 10 km shy of the town, we had hoped to go for a bike ride here in the morning.  Dead quiet, it’s just us here.  Climbing into bed we feel the temperature dropping. The next morning we woke to Narnia’s winter wonderland.  A blanket of delicate white snow covered everything.  A year since we’ve seen snow, it was so pretty!  Still, I didn’t get out of bed till the heater has us cosy enough to be able to make a cuppa tea without shivering.  Am now wishing I hadn’t thrown away my Mexican knock off Ugg boots!!

The kids are out the door quickly, wearing just a jacket, toque and flip-flops to play & throw snowballs.   No biking today, but we did find a short hike up and around the Hoodoo’s. A brisk walk before entering the park.

Bryce Canyon has been on my ‘Bucket List’ for a long time, even though the clouds are low, we decide to drive the scenic route inside the park.  By late morning and I can see breaks in the cloud, piercing blue sky and sunlight give us the break we needed.  Each view point offers a different perspective on the park.  Simply incredible.

‘Inspiration Point’ has the greatest vista of all, perfect for that iconic photo.  The size of the canyon, each fin, window and Hoodoo so perfectly sculptured by mother nature.  We’re standing in a corner of her workshop, looking in, watching her invisible hands delicately sculpting the red earth clay.  My breath was truly taken away, and not just because we were at 9,000ft!

A unique environment, the red clay cliffs are always changing.  Snow, rain, wind and freezing temperatures are constantly eroding the Walls or Fins which gradually open up to ‘windows’.  Once the window tops collapse the ‘Hoodoos’ are what remains, Centuries standing to attention, until they too, slowly erode away, crumbling like those before them.

Moments after climbing back into the truck the clouds rolled back in, wet snow caked the windscreen, time to go, visiting hours are over.

Time to head to lower altitudes and warmer temperatures!

Thanks for sharing Mother Nature!