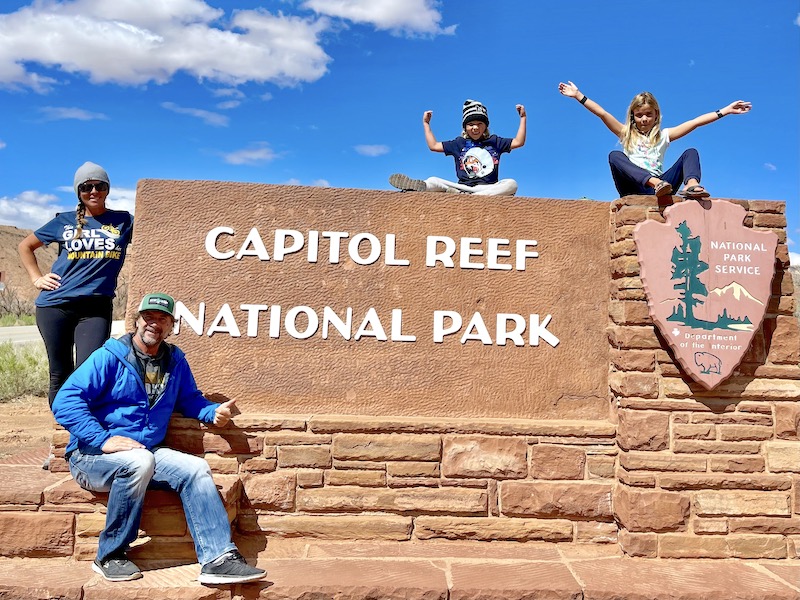 The Grand Staircase-Escalante National Monument spans across nearly one million acres of public lands and contains three distinct units: Grand Staircase, Kaiparowits, and Escalante Canyon. From its spectacular Grand Staircase of cliffs and terraces, across the rugged Kaiparowits Plateau to the wonders of the Escalante River Canyons, the Monument is a diverse geologic treasure speckled with monoliths, slot canyons, natural bridges, and arches.  Driving across Southern Utah we could see these giant steps of pink, grey, white, vermillion and chocolate.

Due to its remote location and rugged landscape, this area was one of the last places in the country to be mapped. The Monument is also an outstanding biological resource, spanning five life-zones – from low-lying desert to deep green forests. Within this vast landscape, the Anasazi and Fremont cultures made contact around AD 950-1100, leaving behind preserved rock art panels, campsites and granaries. Stepping further back in time, fossil excavations have yielded more information about ecosystem change at the end of the dinosaur era than any other place in the world.  The Monument’s size, resources, and remote character provide extraordinary opportunities for geologists, paleontologists, archeologists, historians, and biologists in scientific research, education, and exploration.

Driving through this region, passing red and pink, to grey, then white cliffs each indicating a different time period in the earth’s history.  In an effort to avoid the rain or snow, we decided not to go further, and camped the night in a, ‘no camping’ area.  Naughty, but with the heavy grey clouds looming, we’re happy to take our chances.  Thankfully nobody came and neither did the rain.

Today was to be one of those epic 12 hr driving days.  Starting early, we’re rolling by 8am and headed to Capitol Reef National Park.  The red rock cliffs are impressive, but we’ve seen soo much of them in the past week, we’re a little blaze’ about them, how spoiled are we?!

Leaving the park we opted for the road less travelled, a quiet back road on the map shows that it will put us out on the edge of Glen Canyon, and the North shore of Lake Powell, to a small ferry… if it’s still running. We’re not just relying on digital maps, actually prefer paper maps, only, our map book is dated 1997, which doesn’t seem that long ago, just 25 years old! A lot can change in that time…..  A beautiful scenic drive, visual feast. All just for us, we never saw another vehicle. Paralleling the road for the first 20km was a crumbling rock ridge which eventually gave way to painted clay hills, mineral rich blends of green and brown. We were alone, no cell or wifi reception, just us in the middle of no mans land and the tail end of Capitol Reef NP, as it’s long and skinny. The kids were getting twitchy, asking to climb to the top. This area was outside the National Park, so up they went, to burn off some energy. Butt sliding down, loving it, there were back up for more…

From the back side of Capitol Reef, down to Glen Canyon to Lake Powell, it was 120km. The slow going pace made for a full day.  Emerging into Glen Canyon National Recreation area, which is another 1.25 million acres edging to Lake Powell, popular water craft recreation area. We were relieved to hear the ferry was operational, and that there was a boat very soon! phew, cos the alternate was a longer drive around. The 20min, $40 crossing now lets us officially say, we’ve been to Lake Powell…

But the day is not yet over… Talking to a couple in the camper truck while waiting for the ferry we heard about the ‘Valley of the Gods’, and how it was a must visit place, and perfect camp for the night. Not far on the map, translated into another few hours of driving and across yet another vast landscape, OMG this country is BIG!!    By now the kids have had enough of the day, so I read to them, stealing glimpses out the window as we head into the truly wild wild West!

The ground is so red, it reflects pink in the clouds! Imagine living here, or discovering this place! I often wonder how those poor pioneers fared hundreds of years ago, making their way across uncharted grounds, in uncomfortable wagons. One wrong turn could cost weeks or months of back tracking and re-routing, and It’s not like there is much water out here either.  Thank god I was a 70’s child!

Once upon a time, people thought the world was flat, and that one day they would just simply sail over the edge.  Well, today we had a similar experience, only knowing that not to be true, but… There we were, driving along, minding our own business, flat land forever, until….it fell off!  An optical illusion, the land abruptly fell away, had we come to the edge of the world? For a brief moment I understood that fear those poor sailors had. There was the edge then, nothing! A 200m free fall to the flatter land below!!  Back at the turnoff there were several warning signs about vehicles weighing more than 10,000 lbs or over weight shouldn’t proceed past mile 25.  We pondered if that meant us, we’re double that, but don’t really consider ourselves ‘overweight’, or not drastically so. So the look on other drivers faces when we pulled up was of total surprise.  Our computer maps showed a switch back road, after driving in Guatemala, we figured it was perfectly do-able for us.   And we were right, the road down was beautifully graded and Jaxon slept through it all. Carved out of the rock with hairpin corners a Guatemalan chicken bus driver could have high speed drifted around! Difficult to capture because of distance and cloud, but in the photo below you can see our ‘edge’ of the world perspective.

Valley of the Gods is yet another geologic wonder with rock formations similar to those in Monument Valley. Tall, reddish brown sandstone mesas, buttes, towers and mushroom rocks. Remnants of an ancient landscape with seemingly forever fetching flat plains. Winding our way further across the valley, away from the sinking sun, we had to find a camp spot quickly if were to catch the sunset. We’re used to people looking at us everywhere we go, so out here in 4WD land we’re getting the long look, only this time i’m not so sure if it’s because of the truck or the cloud of red dust behind us, which will no doubt coat the other campers sitting out with happy hour drinks…Darn Canadians…hehehe

Of course all the easy access camps spots were taken. Spying one, perched up on a ledge, we climbed up to claim what we later decided was the best spot in the valley.  A little tricky 4×4 to get to, but nothing Tim & Bruce (truck) couldn’t handle.  Parked up, engine off, gin n’ tonic in hand, just in time to watch the shadow line creep down the walls.  Sitting beneath a precarious column of rock, i’m hoping tonight isn’t the night, but figuring that it had been there for the past stay 65+ million years, and that one night longer wouldn’t be much. The gamble paid off, we lived to tell the tale! When we left, the next day, the rock was still firmly in place and showed no signs of going anywhere…

Next up, Mesa Verde National Park. Discovering how the Native American cultures lived and thrived in ancient cliff dwellings….