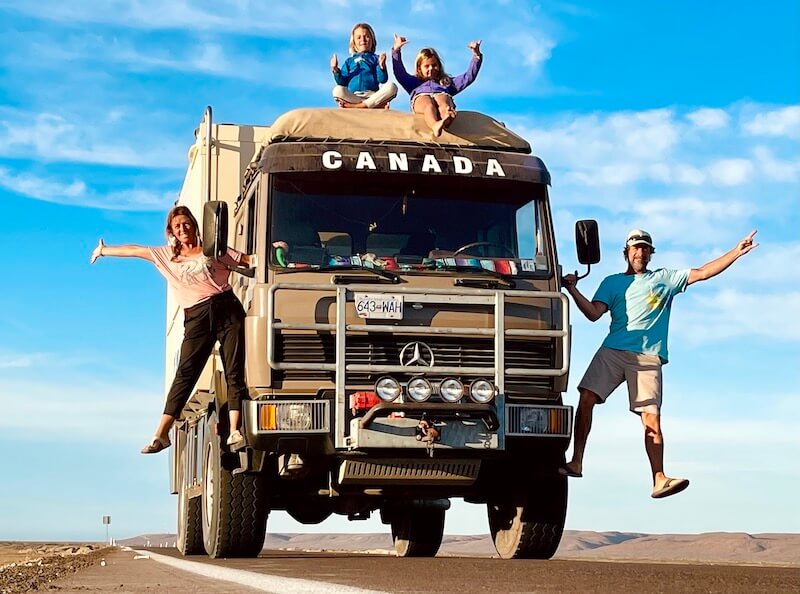 Pulling into Loreto is kinda like coming home.  We’ve been here many times, the last was on our way down the Baja just 16 months ago.  Jeff & Tracy made us feel welcome, opening their home to us.  The kids quickly dumped their bag & headed to the pool.

While out paddle boarding with Nancy, we’d just climbed out of the water, from swimming, when Nancy spotted a fin!  No mistaking, it wasn’t a ray or dolphin, it was a shark, not necessarily a big ‘man eater’, but enough to give us a spook.  We watched as it swam by, its movements suggested it was looking for breakfast, hopefully smaller fish…

Jeff & Tim went out for a dirt bike ride & had fun roopin’ around early one morning before the heat.

The next day Jeff took us all for a ride in his Can-Am.  A 4×4, high performance all terrain vehicle.  Four point harness and headphones for comm’s & music.  Too much fun on the back roads not far from their house.  Fast and smooth, it was like riding on a cushion of air, which reminds me of how much we need to replace the shocks in the truck.

Lastly all the boys went out fishing, early start of 5am, they were gone for the day, returning late in the afternoon sunbaked, half baked and happy with their haul.  Between the five of them they caught nineteen 20 pound, Yellow Tail Tuna!!  Yum! sashimi for dinner.  OMG, it was so good, sliced and dipped in soy sauce & wasabi, it just melted in my mouth.

Back on the road we headed out to what’s known as Baja’s Last Frontier.  Turning West at the sticker covered sign, a sure sign that good surf awaits at Punta Abreojos.   It takes about an hour to get to the coast, crossing the long, straight flats with the high afternoon sun, I found myself wishing we never had to return home, life on the road really is that good.

Charley has Kid Rock playing on full volume, she loves his song ‘Born Free’ and is playing it over and over, singing out loud, Jaxon can’t take it any more and climbs into the front with me.  She loves the lyrics and has decided to make a movie of her trip with this as the theme song.  My born free girl. It looks like we’re crossing what must have once been the sea bed.  Gradually changing over the millennia, to what is now just a vast expanse of dry, shell encrusted desert, where hardy shrubs grow and coyotes roam.

We’d heard about this place from Bianca & Bart, who took a kite wave surfing camp here last year & raved about it.  I was kinda excited to check it out, if it was ideal for us we’d buy a piece of land, as a plot or section is only $3,000. But no, sorry Bianca, we don’t share your love for this place.  Named the last frontier for a reason, it’s miserable here!   A small fishing village at the edge of the sea.   Flat land with no protection, lying in full blast of the wind.  Some of the land is just on the water table, so when the tide is high or stormy, it would turn into smelly, tire sucking, estuary, quick mud.  Living in a swirling dust bowl holds very little appeal, no matter how perfect waves are.   Now, I’m sure it’s much nicer when the wind isn’t blowing, but that kinda defeats the purpose for us.

La Bocana, 15 mins up the road on the mouth of the estuary was no better.  The few trees that have found a way to survive, have grown bent over from the wind.  The beach is pretty but not beautiful, the hard pack, grey sand doesn’t exactly make you want to take your shoes off and run bare feet.  But if you did, you’d have to run the gauntlet through the thorny tussock grass, around the broken glass, and over the garbage strewn dunes, if you make it that far, don’t stop   for the sand fleas that lie in ambush, patiently waiting for their next victim.  Not all of Baja’s beaches are beautiful.

We spent a miserable night being blown around, the windows open just a crack for fresh air left a fine layer of desert brown dust over everything in the morning.  The wind didn’t let up, just getting from the camper to the cab was a mission.  No this place isn’t for us and we couldn’t get out of there fast enough.  After being in beautiful La Ventana, I’ve no desire to be anywhere else for kiting.  Back to that long straight flat road and out of the wind, we stopped and snapped some fun photos, including the featured image.

From coast to coast we are, ping ponging our way North.  The new MX 5 has beautiful views of the Sea of Cortez and has a shoulder, its almost a relaxing drive for Tim.  We pass by many roadside crosses, markers of so many lives lost. Some with smashed truck carnage strewn down the bank. Loved ones & family build roadside memorials, a grim reminder.

Tonight we’re camped just South of San Filepe in what was once a RV, holiday resort that’s now fallen into neglect and disrepair, an all too familiar story in Mexico.  The gate keeper let us in for $10. Not sure what we’re paying for, but it’s a place to camp for the night, not about to use the facilities, too dangerous and probably nasty too.   Walls are collapsing in, roof tiles probably blown away in the last hurricane.  Three tennis courts cracked with grass & weeds growing up through, the net long gone.  Good enough for the night. From Mexicali to Tecate where we crossed the border, we could see Trump’s Wall running the invisible border line.

Crossing into the USA was surprisingly easy.  There was a thorough search for inadmissable foods, and the Chorizo sausage & avocados was confiscated.  Other than that, we weren’t asked if we were Covid safe, ordered to quarantine or given a time line on which we had to be at the Canadian border.  They even forgot to stamp our passports with an entry date.  Which means….we can stay and tour around a little, take in a few of the National Parks on our way, I mean, it would be rude not to, right?!