Fishing Trip to the Island – by Jaxon 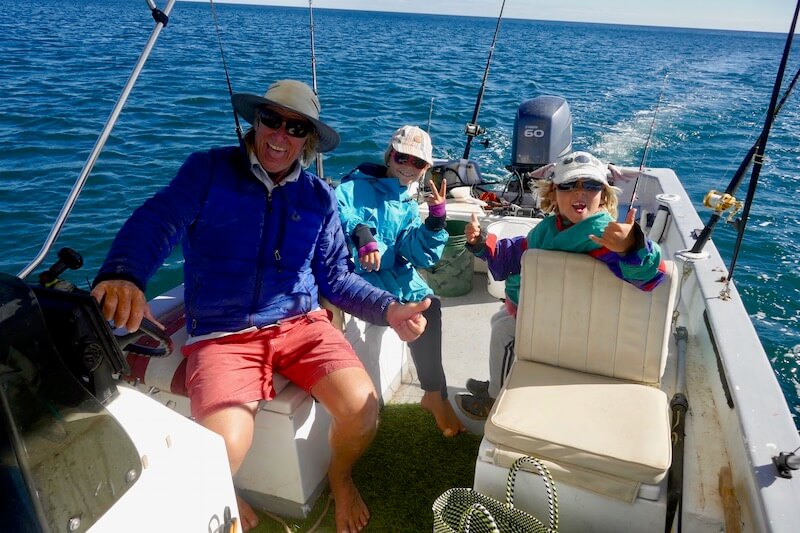 From our camp at the beach we can see a big brown island.  It’s too far away to swim to, but in Dean’s boat we were there in about a half an hour.  We left the boat launch at 8am, to go fishing out in the bay and be back in time to go to school at 12 o’clock.  But instead we decided to go over to the island, because it was a bit windy.  When we got there a fish tugged on my line almost straight away, it was big and pulled hard, I reeled it in but we had to let it go because it was a Skip Jack which isn’t good to eat.

It was still windy and choppy on the water, so we went to the end and around the corner to get away from the wind.  And we saw sea lions on the point, they were sunning themselves on a rock.  We saw 5, they were big and brown, we even heard one of them make a barking sound.  Arr Arr Arr, that meant ‘get out of my territory!’

We dropped 4 lines overboard at different lengths so they won’t get tangled.  And motored along slowly.  Our number 2 fish was a Leopard Grouper, I reeled him in, he was my first Grouper, he fought the hook at first, then when he popped to the surface, he just gave up and I could reel him in easily.  Dean said that they are good eating so we kept him.   Along that area we caught 5 more Spotted and Leopard Grouper, Mum reeled in some too and so did Charley.   You have to be very careful when you remove the hook from the Grouper, they are very spiny and poky, around the gills, near their cheeks they have razor sharp bits. We kept all of them except one, we let the smaller one go so he could grow some more.

The wind went away and the water went flat, the sun was nice and warm so we decided to stay and fish and not go to school, I was really happy about that. And then I caught a small Sierra, which is a kind of Mackerel, and then mum caught a long Sierra, we kept both of them because they are yummy.  The Sierra fish have lots of blood when we kill them, there was red blood everywhere.   And then I caught a Pargo Amarillo, Yellow Snapper, he was red on his face that slowly turned to arrange in the middle and yellow down by his tail.   Dean put a sharp knife into the top of his head, between the eyes to kill it, they don’t have blood like the Sierra.  When it died, it quickly changed colour and turned pink and white.  We kept the fish in a big cooler with bottles of frozen water to keep them cool.

Later we motored over to the lighthouse on the mainland.  We wanted to catch a Yellow Tail Tuna, we didn’t get one, but we did catch a Benito, a small Tuna.  Then we caught a Jack Crevalle, he was really big and fought hard, Dean reeled him in, and the rod was bent right over.  He was the biggest fish of the day, but he wasn’t edible so we let him go too.

We saw a turtle swim by, and  we saw two whales!  A mum and a baby Humpback whale.  The whales were big and they had barnacles on their back, they jumped out of the water back first trying to catch something.  The baby was copying the mum.  The mum’s tail was white underneath and a blue/grey colour on top.   We followed the whales and they went away, they went out to sea diving deep deep deep, but not the baby because it can’t hold his breath for very long yet.

Then it was time to go home, I was really tired, but had a great day.  Altogether we caught about 15 fish saw one turtle, two whales and five sea lions oh and an Osprey in his nest on top of the light house tower.    We shared some of the fish with Dean and kept the rest.  Dad cut up all the fish while I went off to play.

We ate half of the Snapper and half of the Tuna, and froze the rest, we did give Sue and Roger a Grouper. My dinner was so yummy, I could eat fish every day and if I could, I would go fishing every day with Dean too.