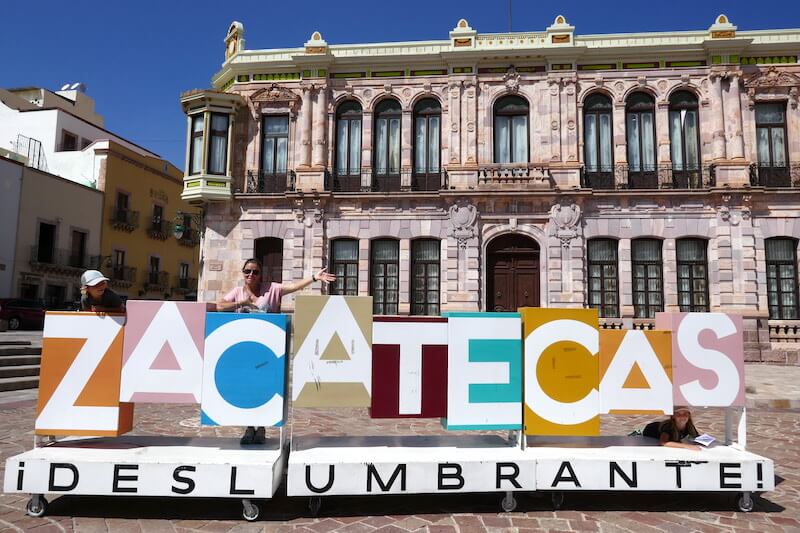 September 21 – 23 Stopping in Leon for just a couple of hours, we found a large parking spot for the truck 5 mins walk from Zone Piel or Leather District.  Here the labyrinth of markets is enough to make you head spin.  Every store and stall owner beaconing us in to look.  Everything leather, jackets in every size hanging in the baking sun, looked like they had been there for years.  Thankfully the styles were all dated.  Belts, bags, keychains, shoes and boots.  Our only purchase was a cute pair of cowgirl boots for Charley which she proudly brought with her birthday money from Grandma & Grandpa.

Coming into Aguascalientes the road was a nasty patchwork of ten times repaired, then long since given up on seal.  It was enough to put us off entering the city, so we stuck to the outer ring road and slowly rattled around, continuing North for Zacatecas.   Another silver rich mining town and home to El Edin Mine.

Our overpriced campground for the night was the carpark of Hotel Baruk, perched above the old city.  Best thing about this place is the easy access into town.  But on a Tuesday afternoon Centro was almost deserted.  Maybe everyone was on holiday in Guanajuato!  There was no energy, no buzzing vibe and very anticlimactic.

El Edin Mine was the highlight here.  We arrived promptly at 10am, the posted opening time. But for whatever reason, the mine didn’t open today till 10:30, and we had to wait for another 25 mins for our guide to arrive. From behind her mask & face shield our guide, Paulina, spoke English as fast as Spanish, unable to hear her clearly, we missed half of what she said.  We did understand that the mine opened in the 1570’s, hand dug by thousands of Mexican slaves for the wealthy Spanish owners.

Children from the age of 8yrs were put to work as water carriers.  Filling contaminated water in animal bladders.  Balancing 2 bags at a time on a pole across their shoulders the climbed the flame lit, slippery ‘monkey ladders’ to the surface then back down again, all day, every day.  Working in the mines was dangerous and often a fatal job. Each worker was given a numbered token at the beginning of their 12hr shift.  At the end of the day, those tokens not returned became the body count for the workers to remove.

Working conditions were horrific, breathing hot dusty air, poor ventilation and no bathrooms meant miners relieved themselves anywhere.  Open flame lighting of fermented soaked wood, a primitive form of dynamite often resulted in injury. Digging by hand, flying rock chips caused infections and blindness, and little did they know that their drinking water was contaminated, resulting in a slow death.   If a miner died leaving a ‘food or tool’ ‘debt’, that debt was then passed onto their children until it was paid.  Resulting in the miners often working and dying for nothing while the Spanish grew obscenely wealthy in the clean air.  Charley didn’t particularly enjoy being down in the mine, her fear of a cave in or being trapped was real. But she was a good sport, and did love seeing the veins of Amethyst, Quartz, Pyrite and Silver in the rock.  She says the best part was taking the small train back to the surface.

We enjoyed the mine tour, but felt the town was nothing special. We chose not to ride the Gondola that runs across the city, because our home town has several gondolas we frequently ride. Perhaps we missed something else? Anyway, no time to waste, we’re off to explore somewhere new!

September 23 – 26 Sierra de Organos National Park lies half way between Zacatecas & Durango.   Other travellers had rated this place highly. We’ve been longing for some wilderness camping where we can explore and get away, and this was the perfect spot.  Designated a National Park in 2008 this place is rustic, untouched and probably crawling with Rattlesnakes.

Seeing the rock formations for the first time was awesome.  Carved out over a millennia these sandstone organ pipe like giants dominated the land.  With the kids talking so much about dinosaurs, I half expected to see a one munching on a treetop!

Camping at the base of these giant rocks was pretty awesome, we set out our chairs, cracked a beer and watched the sun go down. The night temps dipped down to 5’C, chilly enough for puffy jackets and toques (hats for the non-Canadian).  Until the sun warmed the land, the cold crisp mornings made it hard to get out of bed.  But that early light is the best for taking photos, so on with the toque and puffy jacket, a hot cuppa tea in hand, camera in the other, into the cold, we watched the sun rise, ahh a new day!

There were several good hiking trails to explore, but no maps to indicate how far each went. Someone had mentioned the ‘cave hike’ was best done anticlockwise.  Charley not liking the sound of cave and hike in the same sentence, was a little hesitant to go.  Reassuring her that it was just a 3km walk, with a short cave passage, she reluctantly agreed.  Cool mornings are the best time to hike, even though it was just a 3km hike we set off just after 8:30am.  Stopping to take photos, scan the distance through binoculars or watch a lizards sun themselves on a rock.

The cave required lights and climbing up slippery steep rocks, Tim tells me after the fact, there was a bat just 12 inches from my head!  The air inside was dank and dusty, with bat poop no doubt.  Broken glass tells me people come up to party, though I can’t imagine why!  The cave was probably only 75 meters long, at the high point we could see daylight at the other end, encouraging Charley we made for the exit.  Crawling out from under a 3 foot gap we emerged into a three walled hole.  Tim scouting forward deduced that the trail was there, just fully overgrown.  Hmm, bush hacking through rattlesnake country wasn’t the most appealing prospect, but it was our ONLY way out, I took the lead.  Surviving that our next challenge was a daunting rock climb, free climb as we didn’t have ropes, but the super grippy 45’ climb turned out to be fun.

Sitting at the top we knew we were on the far back side of the park.  If any one of us were to fall and injure, it would prove to be a very challenging extraction.  Quickly changing the subject in my mind as we sat down for a break to take in the truly buena vista!  The sun is high in the sky, the past 3hrs have flown by.  From our lunch spot we can see the trail below, certain it’s a Mountain Goat path as no human in their right mind would attempt such a thing, let alone a family with two young kids!!   Listening for that distinctive rattle my mind plays tricks on me, darn cicadas.   We’re told that if we were to be bitten, we’d have just 1hr to get the anti-venom from time of strike.  Not the best odds when we’re at least 2 hrs from the truck and another 1.5hrs from the closest town that may or may not have the drug because it’s expensive and has a short shelf life.

Carefully we climb down and make our way out, our epic 2.8km hike took a whopping 5.5hrs and we survived to tell the tale!  Needless to say we all slept well that night.  Probably not from the physical exertion as much as the mental!

It’s quiet during the week, locals come during the day to hike, picnic, and crank the car stereo, blasting out an eclectic mix of music at full volume going from Shade to Mariachi brass band.  The barbecuing enough food to feed a village when there is only 6 of them.  But the Mexican hospitality is second to none, returning from our ride, they waved us in, insisting we share their food.  I mean, it would be rude to say no, right!

40km out of Durango we pass a dazed and confused bird on the side of the road.  Clearly he’d been clipped by a vehicle.   Sadly we see too many animals who have been hit by traffic, mostly dogs.  Unable to leave the poor thing there we turned around to go get him.   He’s a juvenile Caracara, the size of a hawk.  With leather gloves and a towel I slowly approach and cover him, there was no struggle, poor guy was exhausted, I wonder how long he’s been sitting there.  Bundled up we take him to a vet and leave him in the gentle caring hands of those we hope will see him well and back into the wild.

Durango is a sprawling city built around the old Centro Cathedral.  Markets are overflowing with enough stuff to fill every house in the country!  I swear Mexico will collapse under the weight of it all.  Durango’s distinction appears to be the scorpion, it’s everywhere.  Fermented 6” scorpions in bottles of Mezcal, preserved forever in belt buckles, numbers on the clock even smaller ones encrusted in candy.

We took a stroll through the Historic Centro, browsed casually in the stores lining the pedestrian stroll before making our way out to town down the 40D towards Mazatlan.