Guanajuato has Iguanas and a snake! – by Jaxon 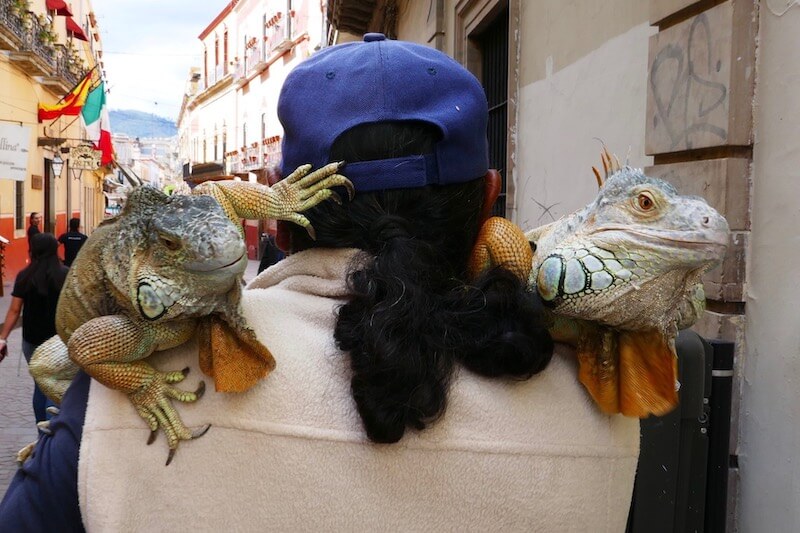 I really like visiting Guanajuato because we went for a walk for most of the days and one day we cam across a man carrying 2 Iguanas on his shoulders walking down the street. And we asked the man if we could hold them, he said yes if we gave him 20 pesos. Charley’s Iguana wanted to move, he was very wriggly. My Iguana was heavy, he felt scaly like a snake and he wanted to climb up on my face. He had big long claws and a long tail. He was a green, greyish with some red on his legs and they had Mexican names that I can’t remember.

Another day, after we visited the Silver mine, we were walking down a different street when I saw a snake on a lady’s shoulders. It was a 3 year old, Boa Constrictor named Giraffe. We asked her if we could have a hold, she said yes and we had to pay her 20 pesos too.

The snake was heavy and started to slighter around us. His tongue was blue and he made a hissing sound as he licked Charley’s arm. We weren’t afraid. He felt dry, heavy, strong and thick. Did you know that a full grown Boa Constrictor can wrap around its prey as big as a deer or a pig. But this one was just a baby.

We went into a mine, it was dark and Charley was very nervous. She was tugging on dad to get out. The stone stairs were big and steep, so I hung onto the handrail. It was a silver mine, that was warm inside, I got to see where they kept the silver coins and the silver dust on the scales, the dust was heavier than 3 rocks. I liked going down there because it was dark and a little bit scary.

We did some other cool stuff like taking a ride on the cable car up to the lookout. The cable car ride was fun, we got to go pretty high up the hill. It was red, the tracks were grey and green and I was wearing only orange, except for my Stitchy hat that used to be blue. Charley was wearing all blue. Mum took my picture of me walking along an orange wall, they could not properly see my clothes, it was funny. In a shop we saw a wood macaw parrot wearing a jacket and hat, Charley and I thought that was really funny. We walked through lots of underground tunnels. They were dark with electric lights, some tunnels went through a mountain, another split into two and went in different directions. My sister and I ran all the way through one and mum and dad walked.