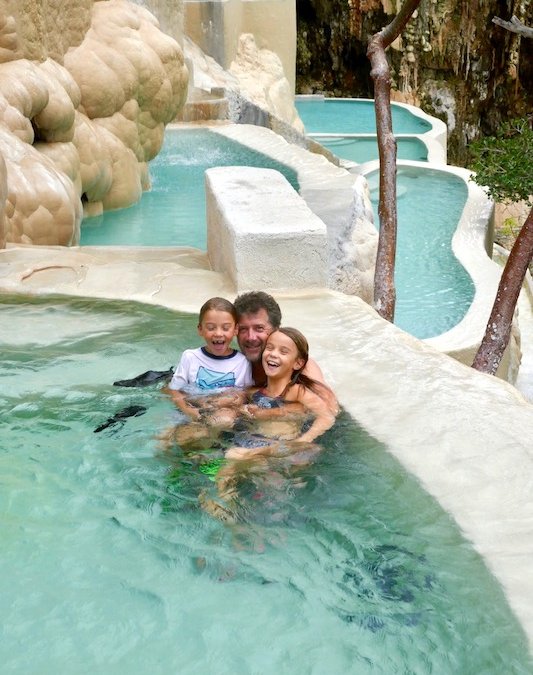 I would describe Tolantongo as a very beautiful place. It’s definitely a must visit because the water in the river is very warm and it’s a turquoise blue in colour. You can only go so far down river before you come across a red tape line going across the river that tells you that you can’t go any further because it’s very dangerous, you could fall down a waterfall or tumble over some rocky rapids and die! (if you look closely, you can see the red tape line going across the river in this photo).

We camped right next to the river where it was nice and quiet. The river was very loud all night long. It wasn’t very deep, about chest deep on me. I liked to play in the currents that flowed down from the next pool up. I walked along the rocky bottom where the current was strongest and I would jump and drift down, it was a lot of fun.

Up stream there is a really big cave called La Gloria, and it has a tunnel next to it that I didn’t want to go into because it scared me. I don’t like small dark spaces. It was really hot inside, adult height and a man sat in a pool of hot water helping people across, I would not like to have that job. He had an underwater flashlight to shine the way. Warm water was dripping everywhere from the ceiling. I got as far as the first pool and decided that I didn’t like it at all and turned around and walked straight out and waited for mum and dad at the entrance.

The big cave was actually a very large pool with a geyser pushing water out of the roof. I felt more comfortable in it because it was a big more open space, not too hot and had lots of light. There was a small tunnel that led to another large water filled cave that had a river gushing into it. To get there we had to swim behind the roof geyser, I clung on to mum’s back and she pulled herself along a rope that was anchored to the wall to help swim against the current to a shallow part where I could stand. Leaving to go back to the main cave there was a small section that had a very low rock making me duck under, up to my chin, on the other side there was another small cave to swim into for a look that was also full of water. I didn’t feel comfortable in there either because it was a small and dark space. Even though Dad had his very strong light, I still didn’t want to do it.

There were lots of other pools to visit, we had to hike up a steep hill for about half an hour to were they were. Some were soaking kind of pools and others were for swimming. The soaking pools were smaller that had some little caves that Jaxon & I would play in. The water was very warm, and flowed from ledge over ledge as if someone left the tap running. The pools are man made with concrete, but because the water has so much Calcium minerals in it, it slowly builds up and makes them look more natural and bulgy. This is also what creates the little waterfalls at the entrance of the tiny caves. There is also a tunnel to the other side and it had a waterfall and river inside, with a small pool that I could stand up in that was filled with the same warm flowing water.

There were also swimming pools, one had a waterslide that Jaxon and I went on at least 30 times. You had to go down on a inflated tube. The slide was curly and fast, we really liked it and didn’t stop until it closed. Then we moved over to the high dive pool where Jaxon did lots of back flips, the Mexican people were amazed by it.

The day before we left the river changed colour, from the lovely turquoise blue to a muddy brown colour. This is because way way up river and in the mountains it rained and all the dirt fell into the river that flowed all the way to La Gloria and turned our river brown. Jaxon and I stopped going in it because it looked yucky.

I like this map because it shows all of Tolantongo, the river flowing down from the caves. The small pools or Las Pozas in Spanish. Where the hotels are and the steep twisty road that Dad drove Bruce down. I forgot to mention, before we were allowed in, before the ticket place, we had to stop a disinfection place where we got out and they sprayed the inside of our truck, to make sure we didn’t have the virus.