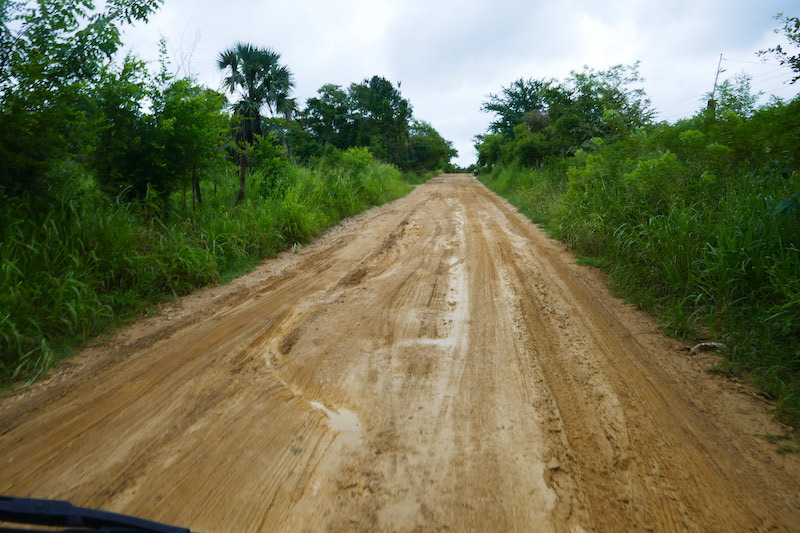 From the dry desert highland heat to the low land jungle humidity, descending we could feel the moisture in the air.   Javier the owner of the orange grove/campground said we were his first guests in 4 months. Understandably a little hungry for camping fees, I negotiated as his asking rate was much higher than the last posted prices, everyone is feeling the economic pinch.

Near by there is a popular swimming lake that feeds the concrete canal which passes by the campground, it’s closed due to Covid, but the water was is clear & clean flowing in the canal by the campground. I wouldn’t say it looked inviting, but we’re uncomfortable enough from the heat to take a dip to cool off. Only it wasn’t cool, more like sliding into a slimy bottomed, warm bath, kinda icky, 5 mins was enough for me so I took a shower in most likely the same water, in the rough concrete-brick shower, with barely a curtain for privacy. The kids swam for the next 2 hours!

5th The clock beeps for 7am. Forcing my eyes open, I climbed out of bed, put the kettle on and pulled on yesterdays clothes, no point dirtying clean clothes. The forecast isn’t great, rain all week. Every day driving we’re treated to new and beautiful sights of Mexico. Winding over mini mountains, i’m amazed at how and where people choose to build their homes. Literally clinging to the side of the mountain or perched on the edge of a cliff. I can’t help but wonder how many homes and or people have slid to their death. I’ve probably said this before, but they keep doing it, everywhere. One good earthquake, a drunken or missed step and you ain’t coming back! Front doors open just a couple of feet from the road’s white line, and kids are playing without a care. Mothers seem pretty relaxed. You’d have to be tough to survive here, the potential of death is constant

Tonight we are camped on a gorgeous property at the edge of a fast flowing river.  Again the owner hasn’t seen any travellers in months and was asking more than others had previously paid. Being the off season, Covid and raining, I negotiated his outrageous asking rate of 500 to 300 pesos. Charley & Jaxon were straight into the mud and river for the afternoon, undeterred by this time, very cold water.

6th Dang it’s hot here and very humid, it’s still raining & everything is damp, so night is enough. Today we’re headed towards some lesser known and pretty cascades a little higher up. Google says it’s only 80km away, which could take anywhere from 1.5 – 4hrs depending on the road, likely 4 for us as we took the back road. Everything is green, passing through endless fields of sugarcane, every inch of flat ground is planted, the rest is jungle. It’s hard to say which plant is competing for territory. The jungle has been clear cut for sugarcane crop. A quick roadside stop, we didn’t think anyone would mind if we took just one cane for the kids to chew on.

Hopes of a more temperate climate are soon dashed. Approaching the town & entrance to the falls, we’re met with the thermometer aiming, hand sanitizer pumping, Covid cops. They were quick to let us know that the falls are closed, I said that we’d driven all the way from Canada just to see these very falls, but the old guy wouldn’t budge on his ruling. Pooh! We’re forced to turn around and head back to the humid heat. Onward past more sugar cane, to our next planned stop, the most spectacular and highest falls in the state, Tamul Falls.

So much for a short day of driving, we left at 8am and it’s now 5:30. Our GPS says the last 10km is unpaved, it doesn’t say how rough & muddy the road is. One downside of being in such a big truck is that we stick out like a sore thumb! Everyone stops and stares as we drive by the little village. Fingers crossed the falls would be open, of course they are, otherwise there would be a sign back at the road, right? Wrong, the falls were closed! Sh*t!

I’ve had enough of today, it’s pouring rain, we’re hungry and it’s getting late, & we need to find a place to camp. Back down the bumpy road, we turn down to the river.  Finding high ground away from the banks, Tim cuts the engine, he’s also done for the day.  The dusky sky is filled with thousands of dragonflies feasting on swarms of mosquitoes and horses roam free.  It’s a perfect camp for the night, though Tim feels a little vulnerable.  Probably because we’ve just read about the retired American couple found murdered in Baja.  Turning out the lights it starts raining heavily, my last conscious thought was that if someone wants to brave the rain to bother us, then we’re fair game.

Our only visitors were the mosquitoes buzzing at the screens. Tim was up at 5am wanting to get moving, the rest of us were still in deep sleep, so he waited till 7:30 to wake us.  Ok, enough of the low lands, time to make our way to Tolantongo, fingers crossed they are open!