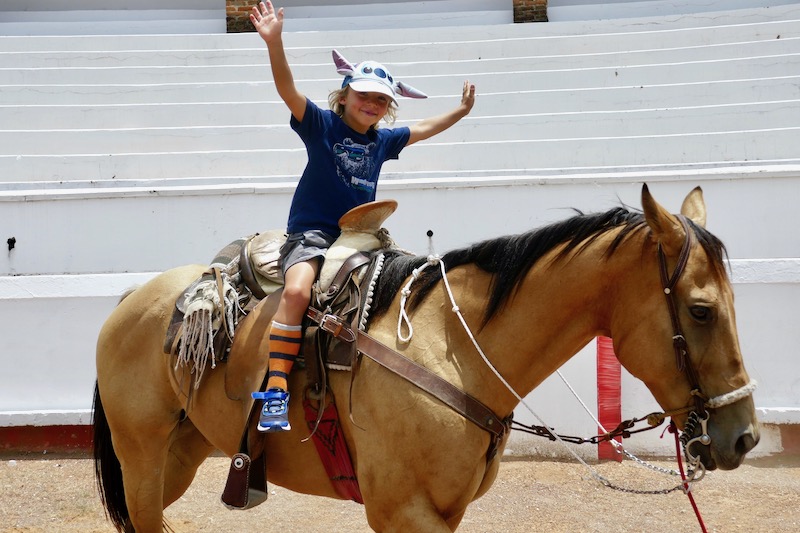 August 23rd is my real birthday, but we had my party on the day before which was the 22nd, it was a surprise party and I was surprised!  We had it at the bull ring by Jayla’s holiday house in San Miguel.  We had a bouncy castle, a horse to ride, a superman piñata that was filled with lots of candy.

I got to have lots of rides on the horse, and one time he started to run and I was getting bounced all over the place and I thought I was going to fall off.  Then he stopped and took a pee, we me on his back, in the MIDDLE of the bull arena.  It was so smelly I had to block my nose, It was really weird, his back was vibrating.   He didn’t poop with me, he did that when it was Charley’s turn.   He had a very soft nose and he didn’t like carrots, we tried to give hime carrot treats and he wouldn’t eat them.  He probably wanted some apple pie or guava berries.

The bouncy castle was filled with hot air and we jumped for ages, once it came disconnected and all the air came out and we were on the ground.  The Piñata was one of my favourite times because we got to hit it really hard lots of times till his legs flew off and then all the candy fell out.  We had cake too, back at the house and I blew out all 7 candles in one breath.  I wanted to have a sleep over at Jaylas house, but we walked home when it was dark and I was tired because all of those dumb hills were too steep and my legs were tired.

I also got lots of cool presents too, I got two baby dragon eggs, a dragon Lego set of a big dragon and some dinosaurs, and a jigsaw puzzle and some slime. I had the best birthday ever!