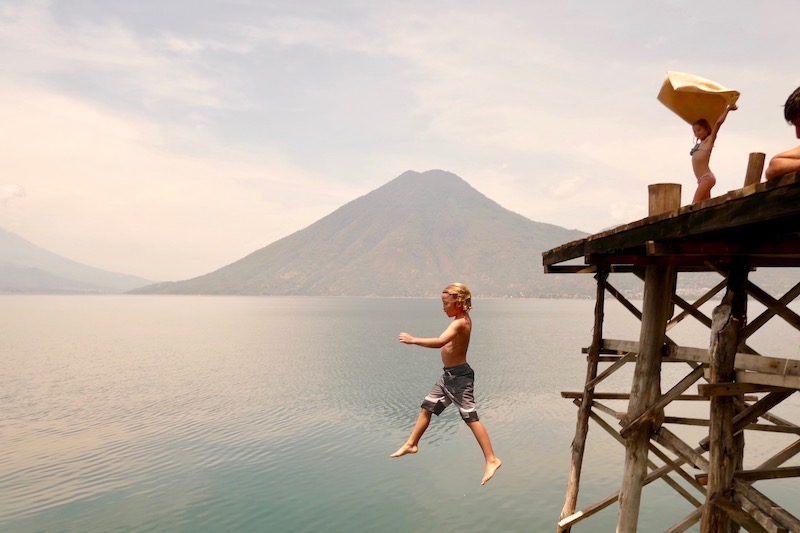 I got to drive Bruce on the big bumpy roads. I had to sit on dad’s lap because I couldn’t reach the pedals, so I did the steering and Dad did the speed and brakes. I like driving her, when I’m older and bigger I’ll drive her again.

Guatemala has lots of those falling down ruins places that are usually really boring, but I liked this one because I got to climb on them. .

Our place on Lake Atitlan was my favourite part about being in Guatemala. We got to go paddle boarding and swimming every day. And my most favourite part of that was diving and jumping off the dock. In the mornings after 1st breakfast and school work I liked going down to the dock with Martin and Susanna, we did some big jumps off the dock together yelling Geronimo!

They have lots of different kinds of bugs. We saw two different kinds of Scorpions in our house. Some with bigger bodies and bigger pincers, those ones aren’t as poisonous as these ones with the lighter colour legs and smaller pincers. See the size of his tail, that’s bigger than the black ones and his tail has a much stronger sting that comes out of the tip of his tail with a barbed hook on the end. I also liked the green flying bugs, but we didn’t collect these ones. One night when we left the windows open and when the rains started, our apartment filled up with thousands of flying ants with fairy like wings, and the next morning down at the lake, the water was covered in even more of them, we didn’t go swimming that day, and then they all just disappeared either the fish or the birds must have eaten them and had a feast!

I also liked hanging out Grandad and Jen. Grandad would read to us and help me with my school work. I like playing Go Fish with Jen, and I used to mostly win, I always had more pairs, and we would play Hide and Seek with her. I painted some pictures and rocks, I painted a picture of Poki on a rock for Grandad, and he really liked it.