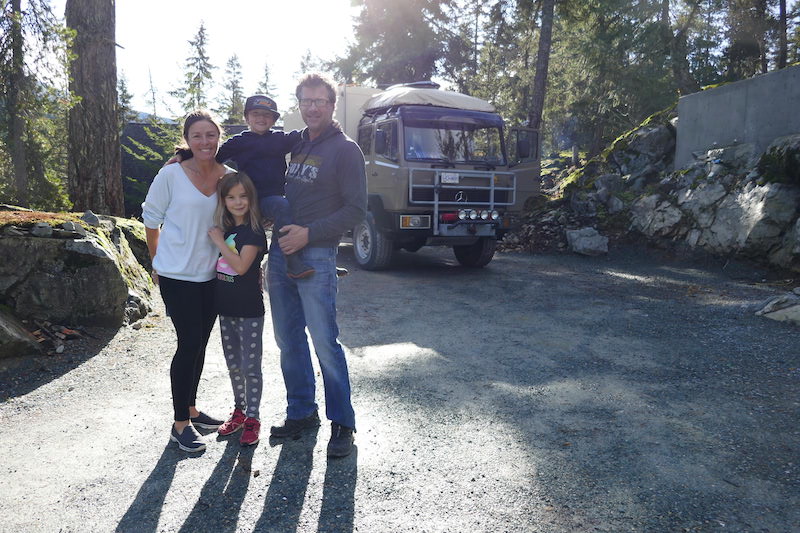 Whistler BC to Pauyllup WA.

Not sure how much sleep we got last night, we were both excited and anxious about going, and the estimated 4 hours it would take to get the rest of the house packed up, clean & property looking all spiffy.   I was wide awake at 4am, which meant only 4 hours sleep.  My rolodex to-do list constantly spinning.   5 o’clock, it ain’t happening, time for a cuppa.

The morning flew by, the rain had stopped.  Tim took care of outside, I did the inside, no idea what the kids were doing…

It was 1:30pm by the time we rolled out of the drive way.  Not exactly the scenario I had in mind, of 2 vehicles, but my car is to be stored at Lucy’s (Tim’s mum’s place) in Vancouver.

We left the kids with Lucy for an hour and buzzed down to get Tim’s international drivers licence & extend the campers insurance.   After a quick farewell, we took on Vancouver’s rush hour traffic, ugh.

Next stop was to pick up a the paper maps then out to the border which wasn’t too busy.  We had the choice of 3 lanes, Murphy’s law, we ended up in the slowest, with the most unpleasant of border guards we’ve ever encountered. That was the moment my blood ran cold, realizing that this man held the fate of our trip in his hands, if he decided, for whatever reason to refuse us entry, right there & then our dream would have been shattered. He sends us inside where we are ‘processed’, with great relief with the nicest guard, who could clearly see we were just a normal family wanting to go to Disneyland.  Friendly & chatty, engaging the kids, let them stamp their own passports and we were on our way.

We hop on the I5 South and drive till 2am.  Needing to get South of Seattle  to avoid traffic. The roads were busy, but traffic was flowing nicely.  We camp in a Cabela’s car park the night and sleep soundly.

It’s a cold crisp morning, we all slept soundly.  After picking up a couple of items at Cabela’s, a massive outdoor hunting, fishing, camping supplies store we hit the road.

The kids settle in quickly, and it’s a relaxing morning drive as we pound out the miles.  Yesterday we drove 420km, today we will do 515km.  Down thru Washington, into Southern Oregon.

With each stop, we are attracting people who want to ask about the truck, our plans or tell us of their past travels.  One man was so excited for us, genuinely friendly, chatting as though we had known him for years…

Not exactly an early start today, driving by 10am, damn, when’s it gonna warm up, I thought the further South you get the warmer the weather.…  Miles after miles of I5, the hours roll by quickly.  Breakfast is pre made overnight oats with fruit & yoghurt, lunch are truck made sandwiches, with snacks of cut fruit & almond butter, veggies & hummus.  Dinners I pre cooked & froze.  Finding food in the US is usually the fast & fatty kind.

We are seeing a long & steady stream of fire trucks of all sizes, coming from Oregon heading South.   Chatting to some of the firemen at a rest area in ‘Weed’, they are answering the call for help as the Sonoma County, fires are raging out of control.  Just as well we aren’t planning on heading that way.   That said, the roadside rest area we do sleep in for the night is just 500m from a grass fire, we’re up wind & on the other side of the highway so not worried about it.

Looking at the map, I’d say we are half way down, so still many hours behind the wheel for Tim.  Thankfully the long straight boring stretch of not much to look at or talk about is over.  We did pass a few rather large fields of ‘weed’ growing, that unmistakable smell fills the air first, then the neat rows of plants growing happily all in a row, which is interesting to see to say the least!  Then we hit LA traffic, ugg, 8 lanes going in each direction, bumper to bumper.  It’s late on a hot afternoon with a lot of stop n start.  Drivers oblivious to the weight of us, slip into a tiny opening just to get one car ahead.  Kids are getting fidgety, we’re all tired, hot & hungry.

That night we checked into Orange RV park and move into ‘the neighbourhood’.  It’s 4pm, kids are in the pool, I prep dinner, shower & organize the camper.  It’s amazing how messy everything get so quickly, my guess is that I’ve probably packed too much, am gonna have to remove some excess items, even though I thought I was packing carefully.

“The happiest place on earth”, am not so sure about that, Disney is stressful!  You have to be strategical, constantly on your phone, planning your approach & booking the next fast pass so you only have to line up for 5-15 mins as opposed to the 45-1hr.  Navigating each ‘land’ all while the kids demanding ‘put your phone away’!

Here they specialize in people management.  They direct the physical movement of the masses and coax you into spending all you have on everything you never knew you never wanted and don’t need, and they are very very good at it.  All the way down to promoting you to go into debt by offering a Disney Credit Card, with 19.5% interest, so you can fund your future Disney dreams.

It is manipulation at it’s best, all sugar coated, as is the food.

Google says approx 44,000 people pour through the gates daily.  It gets hectic.  To meet the Disney characters, you have to join a long line up of 25 mins to have your picture taken.  Makes sense, but the line up thing just isn’t for us.  We did happen upon Donald Duck early line up & joined for 5 mins so kids could have a pic.  Goofy was in the hotel & gave the kids his time.

OK, but from the kids & family experience perspective, it was really fun and we had a really great time.  The detail, the visual, the ride experience is top notch, we left the park each day exhausted.   Staying at the Disneyland Hotel was very helpful, being so close to the park, we paid for convenience.  Park in the morning, swim in the highly chemically treated pool mid afternoon, back into the park for the evening.  Actually we only let the kids swim once, as the pool water burned their eyes & skin and turned their hair to straw.  Again, looks are deceiving, all beautiful inviting water that’s actually toxic sludge.

In Starbucks they have disclaimers warning of possible carcinogenic contaminants from chemicals involved in the production / distribution of their products.  Shit, get me outta here!

Dana Point was an easy 30 min drive South on the I5.   Quick stop at Costco for supplies & a cooked chicken for dinner, then on to Doheny Beach State Park, $40 p/night, right on the beach, and lots of kids around.  Our kids are off on their bikes to explore.

We have 4 days here to get organized, catch up with Auntie Rita, store the camper and fly to the British Virgin Islands…..